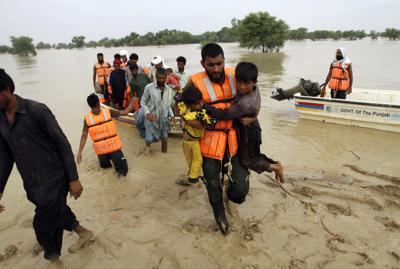 Across Pakistan, torrents of floodwater have ripped away mountainsides, swept buildings off their foundations and roared through the countryside, turning whole districts into inland seas. More than 1,100 people have died so far, and more than one million homes have been damaged or destroyed.

After nearly three months of incessant rain, much of Pakistan’s farmland is underwater, raising the spectre of food shortages in what is likely to be the most destructive monsoon season in the country’s recent history.

This is worse than floods of 2010 that killed more than 1,700 people and left millions homeless. At the time, the Secretary General of the United Nations, Ban KI-moon, described the disaster as the worst he had ever seen.

Pakistan’s compounding economic and political crisis – exacerbated by pandemic-era economic sluggishness and a weakening currency – will be further entrenched by the floods.

A long-running debate over the obligations of rich, polluting nations to help poor, developing countries cope with climate change has become a sticking point in global climate negotiations.

The above excerpts from a recent NYT piece reflect the nature of human follies that are resulting in such catastrophes.