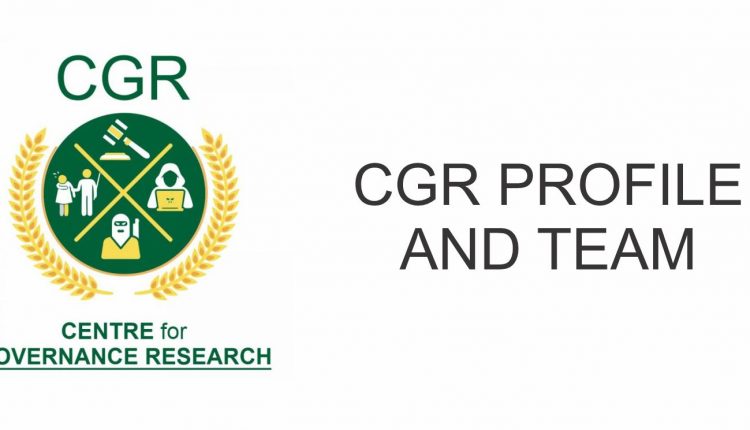 CGR is a forum for studies and debate on strategic and tactical issues related with good governance and the rule of law. It is a non-governmental civil society advocacy centre dedicated to reforms in the justice and governance sectors.

As an independent think tank, CGR sets its own agenda, publishing and disseminating its findings regularly for national and global audience. Using an interdisciplinary approach, CGR brings together rule of law, justice and governance experts, researchers and internationally renowned professionals to animate its debate and research activities.

Headed by Tariq Khosa, Former Federal Secretary Narcotics Control Division, Director General Federal Investigation Agency and Inspector-General Police Balochistan, CGR aims to stand out as one of the rare Pakistani think tanks to position itself at the very heart of the debate on governance and justice issues.

CGR focuses on advocacy, research and studies in the following areas:

Meanwhile, the National Initiative against Organised Crime (NIOC) launched in November 2019 continues as a Project from the platform of the Centre for Governance Research (CGR).

Tariq Khosa has been actively involved in law enforcement since the start of his service in 1973. During about four decades of serving in various supervisory and command positions in the Police Service of Pakistan, he has actively been engaged in structural and operational reforms in the policing and justice sectors.

Before retirement, his last assignment as Federal Secretary of Narcotics Control Division in 2010-11 placed him at the pinnacle of government service in Pakistan.

He served as Director-General Federal Investigation Agency in 2009. As head of National Central Bureau, INTERPOL he won elections to serve as Delegate for Asia in the Executive Committee of INTERPOL from 2009 to 2012 and contributed to international police cooperation. He was actively associated in establishment of Interpol Global Complex of Innovation in Singapore.

He had the distinction of serving as the Police Chief of Balochistan Province in 2007 and brought the entire province in police jurisdiction replacing a tribal policing system administered by the Levies since long.

He graduated from the National Defence College Islamabad completing his Masters in Defence and Strategic Studies in 2004–05.

He was a Hubert Humphrey Fellow under Fulbright Exchange Program at the Graduate School of Public Affairs in University of Washington Seattle in the United States of America in 1987-88.

He was part of the Working Group that drafted the Counterterrorism National Action Plan launched by the Government of Pakistan on Jan 1, 2015 and currently serves as Member of the Committee of Experts for National Counter Terrorism Authority (NACTA).

He is a Member of the Global Initiative against Transnational Organized Crime, a Geneva-based network of professionals.

Staring his career in 1973 as Assistant Superintendent of Police, Mr. Tariq Parvez served the police service of Pakistan for more than 35 years with distinction and honor. His contributions in the field of counter terrorism as a police officer are unparalleled. He has been awarded the prestigious national award of Sitara- e- Imtiaz (Star of Excellence) by the President of the Islamic Republic of Pakistan for his immensely valuable contributions to peace and security of the country. He has served as head of the Federal Investigation Agency and also as National Coordinator, National Counter Terrorism Authority. His contributions as head of the Counter Terrorism Department of Punjab laid the foundations for an organized and highly professional counter terrorism efforts in the province of Punjab, which is host to about 100 million people. He has also served as Home Minister of the province of Punjab. He advises multiple international organizations in the field of counter terrorism, investigations, organized crimes and police reforms.

Samina Ahmed is Senior Adviser Asia and Project Director, South Asia, for the International Crisis Group. Her work focuses on security and stability issues in South Asia, including security sector and criminal justice reform; insurgencies, militancy and jihadism; democratization, authoritarianism and governance; refugees and humanitarian crises; and the risks of regional conflict

Ahmed has a Ph.D. in Political Science and an MA in International Relations from the Australian National University. Prior to joining Crisis Group, she was a research fellow at the Kennedy School of Government, Harvard University and senior research analyst at the Institute of Regional Studies, Islamabad. She was a Peace Fellow at New York University, Abu Dhabi, and a visiting researcher at the Carnegie Endowment for International Peace, Washington DC, the Stockholm Peace Research Institute, and Oxford University.

Muhammad Ali Nekokara has over 25 years of experience as a manager and a leader in the Civil and the Police Service of Pakistan and has served in various police operations and staff assignments in Punjab and Islamabad.  He is currently working as Team Lead with Adam Smith International on a Rule of Law Program and supporting the government of Khyber Pakhtunkhwa in the implementation of the Rule of Law Roadmap. He has also worked with the Government of Sindh and played a major role in the development of the Rule of Law Roadmap which has been approved by the cabinet for implementation. He has worked for multiple international organizations including UNODC, UNDP, USIP, GIZ, Global Initiative and DAI. He has authored publications for PILDAT on Police Order 2002, Police Budgets in Pakistan- A comparative Analysis, Policy Recommendations for Police Reforms, Media and Police, and for PILDAT/UNDP on SDG 16 relating Accountability and Corruption. He also contributes as an Op-ed writer to Dawn, The Express Tribune and The Nation. He holds master degree in Public Administration from Harvard University and in Criminal Justice Policy from the London School of Economics and Political Science.

He can be accessed at: mali1803@gmail.com

Saroop Ijaz is a lawyer and a Senior Counsel for Asia, Human Rights Watch (HRW). He is also a member of the Human Rights Commission of Pakistan (HRCP). He has been appointed as amicus curiae in many significant constitutional cases such as the YouTube ban, Christian divorce act, and the challenge to the local government act 2013 amongst others. He has formerly been the Chairperson of the Lahore High Court Bar Committee on International Human Rights. He has been a consultant and an advisor for the European Union, British Council, International Commission for Jurists, and various other organizations.

Hassan Sardar obtained his degree of MBA (Finance) from the Comsats Institute of Information Technology, Islamabad. Before that, he did his BBA (Hons.) in Finance from the University of Sargodha. He attended various workshops, seminars and conferences including USAID “Grantee orientation workshop” and “Operations Focused Training,” in Islamabad, and “Seminar on Dynamics of Youth and Terrorism: Understanding and Countering the Issue” in Kuala Lumpur, Malaysia. Mr. Sardar is a development professional with more than 12 years of professional experience in the Gulf and Pakistan in various fields including financial management, human resource management, and administration. He worked with many national and international organizations and successfully implemented many development projects in Pakistan. Besides it, Mr. Sardar is an excellent team builder with strong communication skills. He is performing the core management function at CGR.