Why and how is the TTP resurfacing in Swat? 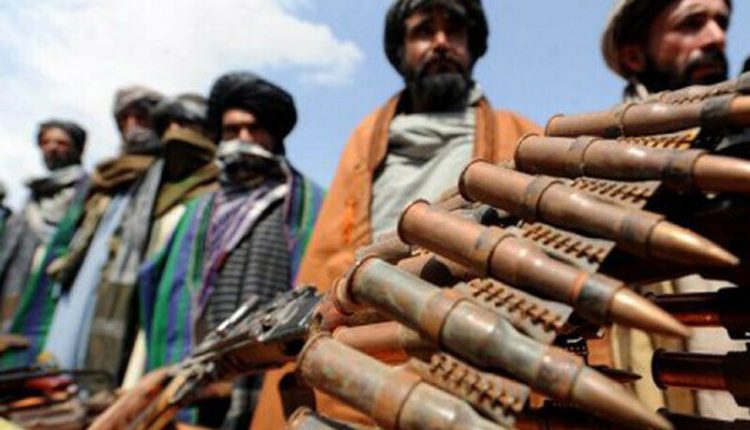 Thousands of protesters took to the streets of Swat on Tuesday, demanding protection against militants, a day after unidentified gunmen sprayed bullets at a school van, killing the driver and injuring two children.

The protesters spent the whole night in the open at a square in the city centre, along with the body of the slain driver, Hussain Ahmad. They dispersed over 40 hours after the incident, only after the authorities promised to arrest the culprits and pay compensation to the driver’s family. 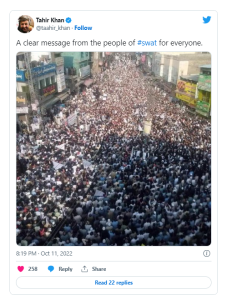 This is not the first time, however, that the residents have sounded the alarm over the presence of militants in the area.

For the past several months, they have been sending clear messages and warnings to all sides since members of the banned Tehreek-i-Taliban Pakistan (TTP) surfaced in the mountainous region. In August earlier this year, the militants detained a police personnel and an army officer after the law enforcement officials launched an operation to capture the TTP militants.

The residents of Swat are no strangers to incidents of terrorism and its spillover effects. At least two million people were displaced from the area in 2009 when the Pakistan Army initiated Operation Rah-e-Rast in a bid to clear the area of militants.
Memories of the brief period prior to the military operation — when schools were forced to be shut, men and women were flogged and bodies would be thrown in the main squares of Mingora and other parts of the valley — and even the fighting itself are still fresh in the residents’ minds and they want to avoid a déjà vu situation at any cost.

How did the TTP militants reach Swat?
No one can say for certain how and why TTP members have now resurfaced in Swat as well as several other adjoining tribal districts. This is the main reason for the unease among the people of Swat and is sure to give many a sleepless night to officials, both in the civilian setup as well as the military. And what have the latter done to allay the fears of the people? Not much, unfortunately.

The return of TTP militants to their respective areas is part of the TTP-government negotiations being held in Kabul, Afghanistan, but no agreement has been reached to this effect. It therefore remains unclear who, if anyone for that matter, allowed the militants to return before a formal deal had been reached.

It is believed that some TTP members were allowed to come back as a goodwill gesture and confidence building measure to take the fragile peace process forward.

On Aug 14, the military’s media wing issued a statement, saying the presence of a “small number of armed men on a few mountain-tops between Swat and Dir has been observed”, located far away from population.

The ISPR also stated that, “Apparently, these individuals sneaked in from Afghanistan to resettle in their native areas”, adding that a “close watch was being maintained on their limited presence and movement in mountains.”

But now, some officials believe the TTP men returned with arms. Others, however, are not convinced. They reason that it is not easy to return from Afghanistan to Swat valley, which does not share a border. The latter argue that they entered Dir district and later reached Swat and that it would hence be difficult to transport weapons along the route.

But the question remains: why were the people not taken into confidence on any such development?

According to the TTP, its members and sympathisers were already present in their respective areas. Here arises another question: why did they suddenly resurface and what made them bold enough to capture army and police personnel?

There is no doubt that the TTP has already established some sort of a system in Swat. The roadside bomb attack on the vehicle of a peace committee member on Sep 13 was a clear example of militant group’s operations in the area.

The former head of a peace committee, Idrees Khan, was among eight killed in the attack. “Carrying out such an attack is not easy and it needs proper planning, monitoring of the target, making a bomb, taking the bomb to the site and assigning a man to explode it,” retired military brigadier Said Nazeer Mohmand told Dawn.com on Tuesday.

On Sep 17, days after the attack on the Peace Committee member, Peshawar Corps Commander Lieutenant General Azhar Hayat travelled to Swat, where he met elders and notables. “Army will do everything possible to ensure that no one takes law in his own hands,” Lt Gen Hayat was quoted as saying to the elders, according to the ISPR.

Although the military had earlier dismissed what it termed a “misperception about alleged presence of a large number of proscribed organisation TTP’s armed members in Swat Valley”, the protests over the last few months indicate that the people of Swat will no longer trust such statements.

The huge anti-terrorism rally in Swat on Tuesday is a message to all, especially those who have decision-making power in security-related matters. As the security institutions are primarily involved in talks with the TTP, it is their responsibility to assuage the people’s apprehensions, which would not be possible as long as the negotiations are shrouded in secrecy.

Uncertain fate of negotiations
A spike in the TTP’s activities has raised serious concerns about the efficacy of a deal to end violence in the country. Although there has been no formal announcement, signalling an end to the June 1 ceasefire, it is practically off the cards as the militant group routinely claims responsibility for targeted attacks. The only difference is that the TTP now uses words such as “attacks in defence” when claiming such attacks. But how would the militant group justify attacks on peace committee members in Swat and other areas of Khyber Pakhtunkhwa?

The last round of talks between members of a joint Pashtoon Jirga in Kabul in the last week of July ended without any progress. With the frequency of attacks being carried out by the militants increasing with each month, it seems unlikely that another round of talks would start anytime soon.

Afghan Taliban factor
Over the last several months, the Afghan Taliban government has hosted several rounds of talks between the TTP and representatives from Pakistan’s government and security apparatus in Kabul. While these talks have little to show for the desired result of a peace deal, the Afghan Taliban now have more pressing matters to deal with internally to spend time on playing mediator.

The July 31 US drone strike in the heart of Kabul that killed Al Qaeda chief Ayman al-Zawahiri has put the Taliban government in an awkward situation. The Taliban government, meanwhile, has not yet confirmed that Zawahiri was at the compound hit by American missiles.

For his part, Afghan Interior Minister Sirajuddin Haqqani, the main character behind the TTP-Pakistan negotiations, told me in Kabul earlier in July that the “Islamic Emirate” government was willing to facilitate the talks. At the same time, he expressed disappointment over the statements of Pakistani lawmakers about the talks.

While in Kabul, I also heard from several quarters many Taliban leaders were unhappy over Kabul’s involvement in the talks because of their complex nature.

There is no doubt that the TTP issue is Pakistan’s internal problem, but Pakistan has been pressing the Afghan Taliban to ensure that Afghan soil is not used for cross-border attacks.

Meanwhile, the Afghan Taliban seems to be in denial mode, which poses yet another challenge for Pakistan.

An Afghan Taliban official told Dawn.com this week that officials have launched a campaign against “mysterious elements” who live in cities and introduce themselves as Afghans, but they are not locals.

He shared this when asked about Pakistan’s growing concerns over the inability of the Taliban rulers to address Islamabad’s concerns regarding the use of Afghan soil against Pakistan. It seems that the Taliban government is now feeling the heat from Pakistan, but it would be premature to make a conclusion, until their actions are felt on this side of the border.

Centre-province politics
What is most unfortunate about this whole situation is that the PML-N led federal government and the PTI government in Khyber Pakhtunkhwa are engaging in politics even over the Swat issue.

While the centre is blaming the KP government for failing to maintain peace, Barrister Muhammad Ali Saif, the spokesperson for KP government, has conveyed to Defence Minister Khwaja Asif that the “security situation in KP is better.” Such an irresponsible statement by a senior provincial figure shows the non-serious approach of the KP government in dealing with the situation, even as thousands of people were in the streets on Swat, demanding security and protection against militants.

The KP rulers, especially Chief Minister Mehmood Khan, who belongs to Swat, must listen to the voices of the people and set aside politics on such important issues.

The centre and the security establishment cannot absolve themselves of their responsibility of ensuring peace in Swat, as well as other parts of KP and the country before it is too late.

The TTP’s claim of killing a security official in Lahore last week is an indication that the group can and will extend its activities to other parts of the country.