Project Peca I: How to silence a nation 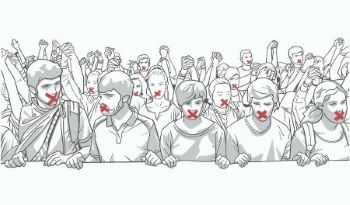 When the PML-N government introduced the Prevention of Electronic Crimes Act (Peca), 2016 in parliament, it was projected as a shield against harassment and hate speech. At the time, authorities justified the draconian measures as a necessity — and many swallowed it, the memories of the Peshawar Army Public School (APS) attack fresh in their minds.

Enacted under these false pretences, the intent behind Peca stands well exposed today, having proven to be an effective weapon in the hands of the state, to harass, intimidate and silence critics.

The most recent casualty of Peca is the Pakistan Tehreek-e-Insaf’s (PTI) Senator Azam Swati, who has been entangled in so many cases across the length and breadth of the country, it is hard to keep count. But he isn’t alone.

Scores of politicians, journalists, activists and sometimes, even ordinary citizens, who dared pour out their frustrations on digital spaces have been hounded by law enforcement agencies ever since the law came into effect.

This attempt at silencing dissent is nothing new. The Pakistani state has a long history of using legal and illegal measures [enforced disappearances, for instance] to ensure everyone toes the line and protect the status quo. And yet, what we have seen under Peca is the state’s creativity of using the criminal justice system to harass, intimidate and silence critics for simply saying things that should never have been a crime in the first place.

A tool for political victimisation

Since 2017, Peca has been routinely used against political workers, journalists, academics, activists and citizens in general, who have been targeted through summons by the Federal Investigation Agency (FIA), FIRs under Peca as well as provisions of the PPC and other laws, including the ATA, followed by raids and arrests, for peddling an “anti-state” narrative or “defaming” public officials and state institutions online.

The treatment meted out to Swati, while condemnable, is not unheard of. While the law to prevent and criminalise custodial torture has only recently received the assent of the President of Pakistan, advocacy around the issue spans many years due to the frequency and prevalence of this practice against citizens. Swati is also not the first politician to be arrested for making “remarks against institutions” on social media.

In 2018, former Senator Faisal Raza Abidi was arrested for “anti-judiciary” remarks. An FIR under sections 10, 11 and 20 of Peca and sections 109 and 509 of the PPC was registered against Abidi, as well as Hans Masroor, the owner of a web channel Naya Pakistan, where the remarks were made, as well as the producer of the web channel, Ahsan Saleem. This FIR followed a previous one for the same act, under the Anti-Terrorism Act and various sections of the PPC.

In 2021, PPP MPA Masood ur Rehman Shamsi was issued a contempt notice by the Supreme Court and later also charged by the FIA under sections 10, 11 and 20 of Peca for his speech about the then chief justice. Eight other PPP MNAs and MPAs were issued notices by the FIA in connection with the investigation in Shamsi’s case.

What began under the PML-N government, intensified under PTI rule and is in vogue once again under the PDM government. Swati may be the latest casualty, but he is not the first and is unlikely to be the last.

The ongoing disqualification case against Nawaz Sharif, disappearances of bloggers and levelling of allegations of anti-state propaganda and blasphemy against them, the vicious targeting of those campaigning for their release on mainstream media, and the rejection of the “Dawn leaks” inquiry report by then DG ISPR through a tweet, dominated the news cycle in the first half of 2017. 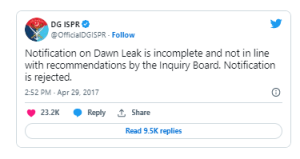 In a press conference on May 13, 2017, then Interior Minister Chaudhry Nisar warned that “anti-institution propaganda would not be tolerated in the name of freedom of speech”, adding that “defamation laws and the cybercrime law would be used against those carrying out propaganda against the prime minister, his family and constitutional institutions of the state.”

The FIA subsequently claimed that several “suspects involved in an organised campaign against the armed forces on social media” had been identified. On May 17, 2017, Karachi-based lawyer Jibran Nasir tweeted a summon he had received from the FIA’s cybercrime circle. The same day, Salar Kakar, a member of the PTI’s social media team, was summoned to the FIA’s Islamabad office. Accusing the PML-N government of harassing PTI’s social media activists, Imran Khan tweeted that the government was “abusing the cybercrime law to politically victimise PTI social media activists.” 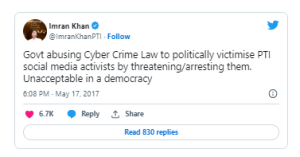 Over the next few days, several PTI supporters and workers, especially the social media team, were summoned and detained, while its party offices were raided and equipment seized.

Taha Siddiqui, then an Islamabad-based journalist, received a phone call from an officer, who claimed to be speaking from the FIA’s counter-terrorism wing on May 18, 2017, instructing him to appear for questioning at the agency’s office. Prior to this, a list of names was already in circulation in which Siddiqui’s name was mentioned — the only journalist on it. After receiving the summons, Siddiqui filed a petition before the Islamabad High Court (IHC) on May 23, 2017 against intimidation and harassment by the FIA.

The fault in our PECA
The following sections of Prevention of Electronic Crimes Act (PECA) 2016 are frequently used to charge individuals with speech pertaining to public officials and state institutions. A bare reading of the sections shows how they are used in a mala fide manner to charge individuals where the offence is not even made out, and how procedures are circumvented.
09-Glorification of an offence
Whoever prepares or disseminates information, through any information system or device, with the intent to glorify an offence relating to terrorism, or any person convicted of a crime relating to terrorism, or activities of proscribed organizations or individuals or groups
10-Cyber Terrorism
Whoever commits or threatens to commit any of the offences under sections 6 (unauthorised access to critical infrastructure information system or data), 7 (unauthorised copying or transmission of critical infrastructure data), 8 (interference with critical infrastructure information system or data) or 9 (glorification of an offence), where the intent is to
1. Coerce, intimidate, create a sense of fear, panic or insecurity in the Government or the public or a section of the public or community or sect or create a sense of fear or insecurity in society; or
2. Advice inter-faith, sectarian or ethnic hatred; or
3. Advance the objectives of organisations or individuals or groups proscribed under the law
11-Hate speech
Whoever prepares or disseminates information through any information system or device, that advances or is likely to advance Interfaith, Sectarian or Ethnic hatred
20-Offences Against the Dignity of a Natural Person
Whoever intentionally and publicly exhibits or displays or transmits any information through any information system which he knows to be false and intimidates the reputation or privacy of a natural person

The IHC issued notices to the FIA to appear before the court on May 29, 2017, restraining its officials from harassing Siddiqui and instructed them to proceed strictly in accordance with the law. Despite court orders, the FIA issued a summons directing Siddiqui to appear before them for questioning, failing which there would be legal consequences.

This time, FIA officials came to the house with the summons. Siddiqui’s wife opened the door and his counsel spoke to the FIA officials. They said he was supposed to appear in person within 24 hours in connection with the inquiry initiated against him, and that he was already conversant with the facts of the case — which is what he was told over the phone when he inquired about the complaint against him.

At the next court hearing, this was brought up before the judge who again instructed the FIA to act in accordance with the law and not harass the petitioner. The officer told Siddiqui to “just come for tea.” For Siddiqui, showing up meant setting a precedent, creating an expectation for other journalists to follow suit — something he said he did not wish to do. In January 2018, Siddiqui escaped an abduction attempt, shortly after which he left the country. However, the threats and intimidation did not stop. Since then, his tweets are frequently reported to Twitter, as violative of local law.

The first arrest under the ongoing crackdown was made on May 28, 2017, under Section 20 and 24 of Peca. More followed. On June 25, 2017, the FIA arrested Quetta-based journalist Zafarullah Achakzai, employed with the local daily Qudrat.

According to his father, he was detained when “some 50 people … kicked down the door at 6am”, then charged him under Section 20 of Peca and Section 34 of the PPC. Achakzai was produced before a magistrate and remanded into FIA custody for six days. He was granted bail on July 4, 2017, against a surety bond of Rs80,000.

A report presented to the Senate’s standing committee on information and broadcasting by the FIA stated that Achakzai was arrested because he had “harmed the reputation of law enforcing agencies (FC & Army) working on law & order in the country especially, Balochistan.” It was not until 2019 that Achakzai was acquitted of the charge.

Turning of the tide

In July 2017, Nawaz Sharif was disqualified by the Supreme Court. Though the PML-N was still in government, the tide started turning against the party. A law, introduced by them and used to target their opponents, turned on the PML-N.

On October 19, 2017, Adil Tanoli, associated with the PML-N’s social media cell, was charged under sections 9, 10 and 20 of Peca as well as sections 500, 501, 505, 109 and 35 of the PPC for disseminating defamatory material against “judges of the Supreme Court, Armed Forces of Pakistan, Government of Pakistan etc”.

In a letter to then Interior Minister Ahsan Iqbal, two female PML-N workers, Aniha Anam Chaudhry and Ambreen Maria Chaudhry, claimed that nearly 20 to 25 FIA personnel entered their house and seized the laptops and mobile phones from all the members of the family. Later, they were summoned to the FIA office.

On October 20, 2017, then recently ousted prime minister Nawaz Sharif issued a statement from the PML-N’s official Twitter account, drawing attention to the harassment of the party’s social media activists and party workers, including the arrests and subsequent disappearance of party workers. He called it an attack on freedom of speech and condemned the acts of ‘suppressing of political views of opponents.’ 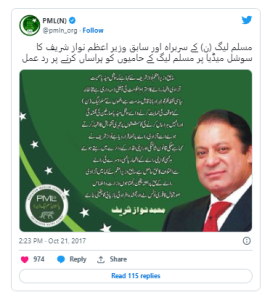 By the end of 2017, the PML-N had started to feel the wrath of the monster it had itself created. But this was only the beginning. Over the next four years, Peca would emerge as the number one choice of authorities to crush dissent, whether it be from politicians, journalists or activists. The victims have changed, the way in which it was applied has evolved, but the underlying purpose has remained the same — silence the nation.