EventsAdvisory Board Meeting
By CGR On Dec 26, 2022 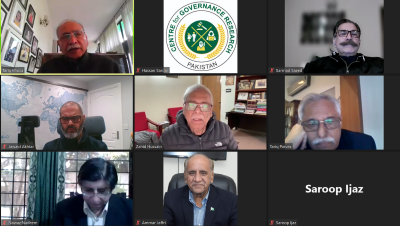 The following matters came under discussion:
1) UNTOC Review Update was presented. The Roundtable on Transnational Organized Crime held at the FIA Academy Islamabad on 16 December 2022 was a great success. Its proceedings will be reflected in a report soon.
2) Three Working Groups were constituted on behalf of the Civil Society Alliance: WG on UNTOC: Convener will be Barrister Umar Mahmood; NIOC expert Azam Khan will be associated. WG on Victims and Human Rights: Convener will be Saroop Ijaz. Dr Fatima Haider of The Grief Directory and Director FIA Athar Waheed will be associated with this WG. WG on Organized Crime: Convener will be Tariq Parvez; Kaleem Imam, Consultant NIOC and Inkisar Khan, DG NACTA will be associated with this WG.
3) The Conveners of the 3 WGs will conduct FGDs in January, February, and March 2022 on topics relevant to their mandate.
4) CGR-NIOC has come up with five papers since the launch of the UNTOC Pilot Initiative on 15 September 2022. All those papers were shared with the UNODC CSU, UNTOC Secretariat and GITOC.
5) Director CGR-NIOC Tariq Khosa participated in UNTOC Constructive Dialogues on Firearms (6 May), International Cooperation (27 May) and TIP (1 July); and also in UNTOC Conference of Parties on 17-21 October 2022.
6) A new Working Group on Criminal Justice System Reform will be constituted on behalf of the civil society by the CGR-NIOC in January 2023 under the chairmanship of former Chief Justice of Pakistan Mr Justice Asif Saeed Khosa.
7) CGR-NIOC will come up with the 2022 Annual Report in January 2023.
Continue Reading
Share FacebookTwitterGoogle+WhatsAppEmail
You might also like More from author
Events